Republic day is celebrated every year on 26th January in India. The day marks the anniversary of implementation of constitution of India.

To commemorate this day, the students of classes 1 & 2 from R V Public School took part with full of enthusiasm in various activities conducted online on 25th January. Students dressed up as freedom fighters  made tricolour flags with the help of ice cream sticks. Students also made  pen stands using tricolour bands.

Students delivered speeches and sang songs  and dedicated it to our freedom fighters.

Republic Day marks the adoption of the Constitution of India and the transition of the country to a republic on 26th January 1950. While our Independence Day celebrates freedom from British Rule, Republic Day commemorates the constitution coming into force.

The Constitution of India came into effect on January 26th 1950, so every year India celebrates Republic Day on 26th January.

Students of class 7 celebrated the occasion during the morning assembly on 25th January.

Amogh of 7A gave an inspiring speech on the Constitution of India. Idhant of 7 A spoke on the significance of the day.

Pratik Simha of 7B played the popular tune of ‘Saare jahan se acha Hindusthan hamara’ on his guitar. Poojitha of 7 B presented an informative ppt. Shaivi of 7 B spoke on the significance of Republic Day.

Bhrithi and Saba of 7C gave inspiring speeches. Gagan and Chinmay of 7C shared some interesting pictures of Republic Day. A video was shown to the students.

The Republic Day is a national festival in India. This year we will be celebrating 73rd Republic Day.

The students of class 8 of RV Public school celebrated this day enthusiastically.

Alok B Jemshetty of class 8B presented a PPT and spoke about why and how Republic Day is celebrated. He concluded with the words that Republic Day commemorates the spirit of independent and individual India.

Sujay of class 8B enlightened his friends with a patriotic thought. Riddhi A Bafana of class 8B gave a dance performance for the patriotic song ‘Teri mitti me mil jaawaan’. Sonakshi G of class 8B concluded the celebration by saying the preamble of constitution. 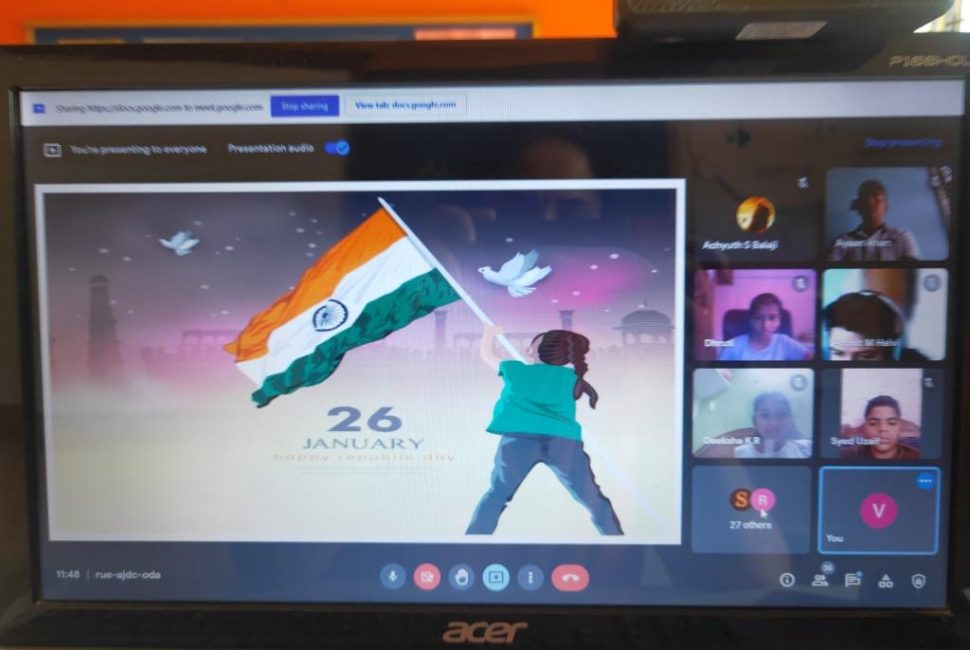 – About Us
– Careers
– Messages
– Alumni

Hit enter to search or ESC to close