14th September is celebrated as Hindi Divas all over India. On 14th September 1949, the Constituent Assembly decided that Hindi would be the official language of the Central Government. Hindi language was spoken mostly in most areas in India, so it was decided to make Hindi the official language. In order to demonstrate the importance of this decision and to spread Hindi in every region, since 1953, 14th September is celebrated every year as Hindi-Day all over India

The R V Public School also conducted eventson 14th September. Students of Class 3 and 4 participated actively. Students gave speeches in Hindi on the significance of the day, melodies of ‘saare jahan se accha’ , and the classic ‘ nanna munna rahhi hoon’ filled the air with patriotism. They also chose to speak on ‘suvichar’.

Hindi Day is celebrated every year on 14 September making the declaration of Hindi Language as one of the official languages of Union government of India. On 14 September 1949, Hindi was adapted as one of the official languages in India. On this day, the President of the country felicitates people for their contribution to Hindi language and literature.

Syed Yousuf of 7 ‘A’ read muhaavare and explained the meaning.

Nandini of 7 ‘A’ gave information about Hindi poets.

Yashitha of 7 ‘A’ narrated a Hindi story and explained the moral.

Poojitha of 7 ‘B’ played a video on Hindi Day in which the high school students wished all of us. 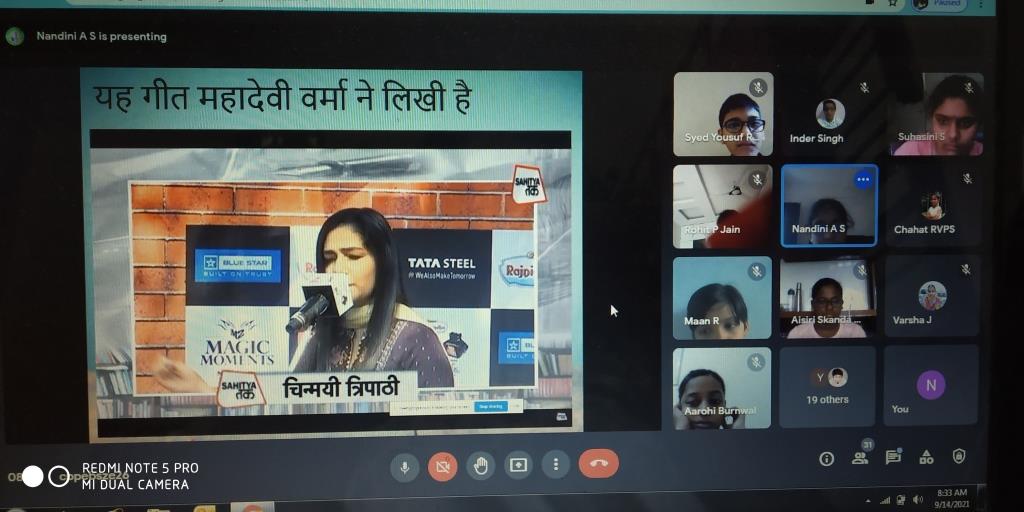 Tobacco use is a global epidemic among young people. As …

India celebrates Engineer’s Day to commemorate the birth anniversary of …

Classes 3 and 4 Kannada Rajyotsava and Diwali were celebrated …

The zonal level National Voter’s Day competition was held as …

– About Us
– Careers
– Messages
– Alumni

Hit enter to search or ESC to close